Who’s on the knobs Bob? 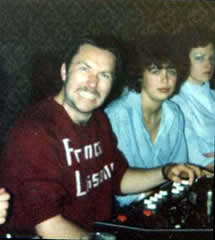 To begin with knob twiddling was Kevin’s domain, while he looked after the live sound Jimmy was looking after the lights. (It was Jimmy who was responsible for deafening all the stage techs on their headset intercoms at the Empire gig). Steve Cumberlidge was occasional guest twiddler. After Jim and Kevin moved on,  live sound was looked after by ex Motorhead FOH twiddler Rich which gave the band a more guitary bias live and notched up the db’s a bit. Jem was on lights and then Gary moved in to share the heavy responsibility of live sound with Rich.  Phil Cogan also took a turn twiddling.

Recordings were twiddled by Pete Coleman. for Homework and Gil Norton & Dave Hughes for Real Music. There is a story that Gil was hired for his work with AC/DC after Angus asked if they could be made to sound more like French Lessons, but that could be complete bollocks. Steve Lindsey (Frankie Average from Deaf School and The Planets) also twiddled on some tracks that were refinished for Virgin 10. Many thanks to all and more power to your twiddle muscles.